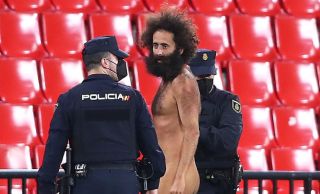 You generally expect that a fan entering the field will be a spur of the moment thing where they’ve just been swept up in the emotion of a game, but that excuse doesn’t wash if a game is played behind closed doors.

There was a wonderful moment in the Granada vs Man United game last night where the camera suddenly showed a streaker just casually plodding his way across the field, and even the TV cameras took a few seconds to react and cut away.

The most confusing part was the lack of enthusiasm or energy from his part. Usually you expect some kind of high-energy “look at me” performance from a pitch invader, but this guy just looked like he was out for a Sunday stroll.

It was just so unexpected because there weren’t any fans in the ground, so how could a fully naked man get that close to the field unnoticed?

The answer is absolutely wonderful, and this is the kind of dedication that almost has to be admired:

Police have confirmed the man who ran onto the pitch naked during Granada vs. Man United sneaked into the stadium at 7am.

He hid under a canvas for 14 hours waiting for the game to start ? pic.twitter.com/Nf4IKS8CBv

This also had the potential to lead to all kinds of issues before the game if a poor stadium worker lifted that canvas to reveal him before the game, but it just shows the amount of planning that he’s put into this moment.