There are just eight match weeks remaining in the Premier League season – and the race for the Golden Boot is beginning to heat up.

In recent seasons, the accolade has been predominantly challenged for by Harry Kane, Mohamed Salah and Pierre-Emerick Aubameyang. While the Tottenham and Liverpool stars are leading the charge once again this time around, Aubameyang, in 13th place with nine goals, is not in contention.

MORE: Despite public reservations, digital Covid passports will be quickest route to fans back inside stadiums in large numbers

While Manchester United’s Bruno Fernandes, Leeds United’s Patrick Bamford and Everton’s Dominic Calvert-Lewin would like to think themselves to be in the running, Kane and Salah have to be considered the overwhelming favourites.

Here’s how things stand hedging into the weekend’s round of fixtures: 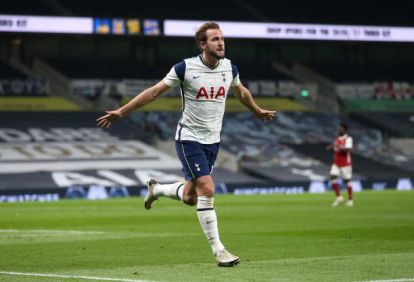 Harry Kane is currently leading the race for the Golden Boot.

There’s not going to be any records broken this campaign, with players’ output decreasing in line with a drop in quality across the board – but that’s what happens when you play a Premier League season in the middle of a pandemic.

Kane and Salah are the two players to watch this weekend and going forward. Tottenham host Manchester United, while Liverpool face Aston Villa at Anfield. Both players can take a step forward towards winning the Golden Boot again by getting on the scoresheet today.