Fulham striker Aleksandar Mitrovic submitted his contender for the worst cross of all-time during his side’s defeat to Wolves on Friday night.

Scott Parker’s men went toe-to-toe with a resolute Wolves side for 90 minutes, with the West Londoners looking the more likely to get on the scoresheet and take the three points.

MORE: Video: Commentators laugh at the absurdity of VAR as Willian Jose’s goal for Wolves vs Fulham is ruled out

However, a late goal from Adama Traore, and quite some goal, too, ensured that Wolves would be returning to the Midlands with the W, edging Fulham closer to relegation to the Championship. 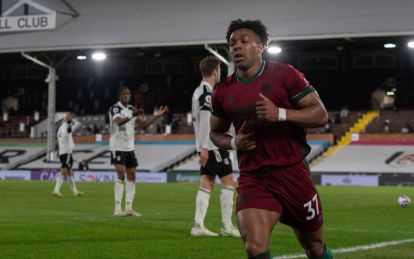 While Fulham were pushing for a winner, one which would have significantly strengthened their chances of staying in the Premier League, star striker Aleksandar Mitrovic found himself in space out-wide.

The Serbian international proved exactly why he’s usually the one getting on the end of crosses, opposed to delivering them, by shanking the ball out of play, a waste of a semi-promising attack for Fulham.

Mitrovic wouldn’t count crossing as one of his major strengths, but you’d expect a professional footballer, and one of his standard, to do better than this…