Manchester United had a goal disallowed in the first-half of their clash with Tottenham, and it’s safe to say that fans on Twitter are not happy about it.

After a cute pass from Paul Pogba and a trademark finish from Edinson Cavani, Manchester United fans would have been up on their feet in their living rooms celebrating what they thought was the opening goal.

However, following a VAR review, during which the referee was advised to go to the monitor, the goal was chalked off, with Scott McTominay being adjudged to have hit Heung-min Son in the face in the buildup. 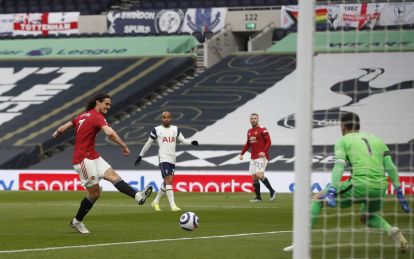 While it was clearly intention from the Scotsman, it did send Son to the turf, preventing any possibility of him making a challenge and stopping the ball’s progression.

Though, it was hardly stonewall, with many Man United fans on Twitter convinced that the officials have got this one wrong. They’re absolutely furious.

Rashford got kicked in the ankle by Lo Celso & got nothing.

After that, #mufc have gotten a goal disallowed because McTominay freed his arm from being pulled back & Spurs have gotten 4-5 fouls for less contact than what happened to Marcus…

Is Son not trying to hold Mctominay back in this picture?

Var in England got to be the most ridiculous thing

One was given as a goal and the other was not,#TOTMUN Mctominay pic.twitter.com/snv0AlRD3G

imagine having a VAR but not running the tape back 3 seconds to see why mctominay moved his hand backwards. we’ve been crap anyway but the VAR system is completely completely broken #TOTMUN pic.twitter.com/jOqgfgFfh2

36′ – VAR rules the goal out for a foul from McTominay on Son. Absolutely shocking #mulive https://t.co/g0j2P3hpAy

It’s accidental contact, natural action when you’re shrugging someone off

Mctominay been punished for being taller than Son.

Son is absolutely embarrassing, he’s only gone down because McTominay’s on a yellow and now we’ve scored they’ve got the physio’s on ???