Did Declan Rice send Chelsea a message with his outfit choice for West Ham’s clash with Leicester City this afternoon? Probably not, but it’s got Blues fans on Twitter excited.

As reported by Standard Sport, Frank Lampard has confirmed that he wanted to sign Rice during his time as Chelsea manager. If the England international is still on the club’s transfer shortlist, you get the feeling that we’ll find out in the months that precede the summer transfer window.

Rice was at Chelsea when he was a youngster and remains close friends with Blues poster boy Mason Mount. With Chelsea lacking in the defensive midfield department, the move makes sense, but whether or not Marina Granovskaia get it done is a different matter entirely. 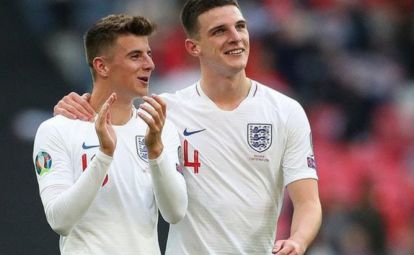 Declan Rice is best friends with Chelsea star Mason Mount off the field.

What Chelsea would benefit from, were they legitimately interested in signing Rice, is a bit of a push from his side. Could this coat, a blue coat, worn on the sidelines during West Ham vs Leicester, be the start of his efforts to get himself a move back to Stamford Bridge.

We can assure you, the answer is no, but these Chelsea fans are getting excited nonetheless…

Declan Rice knows what he is doing. pic.twitter.com/Om5XBcEWLx

I believe we have signed him in the secret

Absolutely he look good in blue?