As the summer transfer window steadily nears, Premier League clubs will already be in the process of identifying targets and arranging moves, with some eyeing the Championship for any potential bargains.

Barnsley forward Daryl Dike continues to pop up in the transfer rumour mill ahead of the season end, with the likes of Tottenham, Chelsea, Manchester United, and Leeds United, to name a few, linked, as reported by Fansided.

Registering an impressive rate of eight goals in 14 appearances, it’s not entirely surprising that the 20-year-old has caught the eye whilst on loan from Orlando City.

The talented striker would certainly make a great deal of sense for Marcelo Bielsa’s West Yorkshire outfit, particularly with star man Raphinha being eyed by Liverpool.

With a valuation of €5m, (according to Transfermarkt), the American would represent a low-risk potential bargain for any Premier League side willing to take a punt.

For clubs lower down the table, it may be an opportunity too good to turn down, with the financial ramifications of COVID-19 severely affecting the transfer plans of sides across Europe.

Wait too long, of course, and some of the heavyweights may snap him up first. 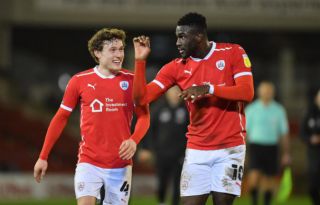