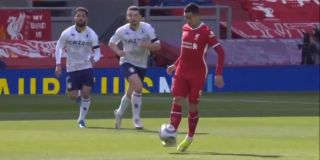 Bobby Firmino returned to the Liverpool fold as the Reds secured a dramatic, late win at home against Aston Villa.

One moment that caught the eye in the tie, inviting co-commentator Jamie Carragher to exclaim in delight, was the Brazilian’s lovely first-touch to kill a ball launched into the stratosphere by Trent Alexander-Arnold.

Jurgen Klopp’s men’s latest victory was their first at Anfield since the turn of the year, keeping alive the club’s hopes of qualifying for the Champions League via the top four spots.