Another away game, another come-from-behind victory for Manchester United.

It’s a position that the Red Devils have become accustomed to throughout this 2020/21 Premier League campaign.

Ole Gunnar Solskjaer’s side are certainly not making life any easier for themselves, but credit where it’s due, the Norwegian has managed to ensure that his team’s have battled back from losing positions on multiple occasions.

In fact, according to information from the OptaJoe Twitter account, United have only been in winning positions 26 percent of the time this season, placing them 11th overall when compared with the rest of the division. 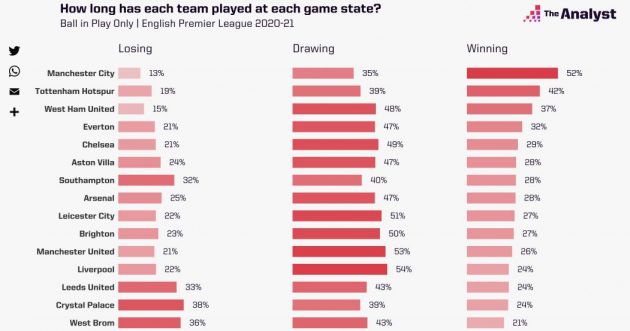 Though that will make uncomfortable reading for many, particularly United’s long-suffering fan base that demand the very best week-in and week-out, it’s worth noting Solskjaer’s contribution.

He’s not Sir Alex Ferguson, and never was, but he has his team playing decent football most weeks and, thanks to comebacks that he has helped engineer, they’re in second place in the league and in with a shout of European glory.

That’s worth something, surely?