Paris Saint-Germain are intent on beating Barcelona to the signature of Lyon star Memphis Depay, according to Todo Fichajes.

As is mentioned in the report, Depay has been talking to Barcelona over a reunion with former national team boss Ronald Koeman.

However, thus far, there has been no agreement reached.

With the former Manchester United man leading Lyon’s charge for the Ligue 1 title, it’s no surprise to hear that PSG have taken notice.

Todo Fichajes report that the current champions are keen on adding Depay to their forward line, regardless of whether Kylian Mbappe stays or goes. 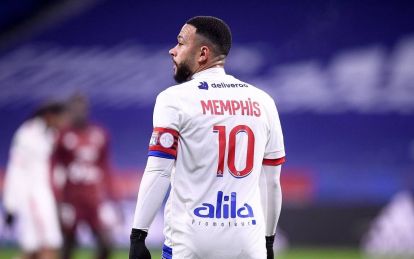 Memphis Depay could have to choose between Barcelona and PSG.

The report notes that Barca failed to agree terms with Depay, with their offer seemingly falling short of his expectations.

PSG have one of the biggest transfer and wage budgets on the planet, and with Depay able to move on a Bosman, you get the impression they’d be able to offer a pretty considerable pay packet.

Barcelona must be sick to death of PSG, having been knocked out of the Champions League by the French side, who are now looking to steal their transfer targets.