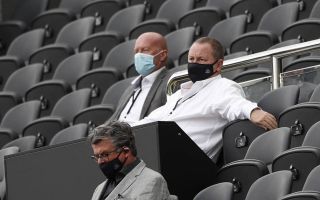 It’s amazing to think that Newcastle United fans were teased with the prospect of a takeover and some huge-money signings last year, whereas the reality of another season of Ashley and Bruce was an especially cruel alternative.

The problem with Ashley is he has no ambitions beyond finishing 17th in the Premier League, so the club won’t be able to grow or compete until he’s removed.

A recent report from The Daily Record has indicated that a big change is coming in terms of the team kit, and there are signs that this spells the end for Ashley.

It’s suggested that the Newcastle store run by Sports Direct is set to close, with kit-supplier Castore set to take it over in a new £5m deal.

The reason this is significant is because it’s one of the conditions set out by the Saudi-led group who are still looking to takeover the club.

It’s not all good news as it sounds like the current staff in the shop are set to lose their jobs and there’s no sign that they’ll automatically be re-hired by the new store so that is a huge downside of this.

The takeover is still subject to a legal campaign so there’s no guarantee that it goes through, but it finally looks like Ashley’s time is coming to an end.