Arsenal star Bukayo Saka is in full training with his teammates ahead of Thursday’s Europa League second leg clash with Slavia Prague.

The Gunners’ season could essentially end on Thursday night, with the prospect of winning the Europa League and qualifying for the Champions League via that avenue virtually all that Mikel Arteta’s men have left to play for.

MORE: Contract signed: Arsenal starlet to commit his future to the Gunners until 2025

It’s for that reason that Arteta and everyone with any Arsenal affiliation will have been so concerned to see Saka leave the field injured during his side’s 3-0 victory over Sheffield United at the weekend. 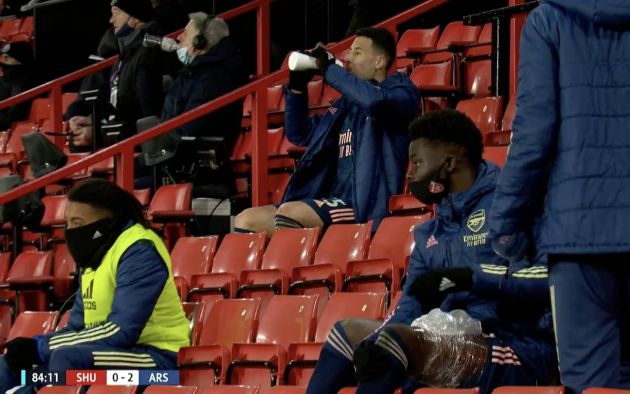 Saka was spotted in the stands with ice strapped to his thigh.

However, whatever damage was done to Saka’s thigh at Bramall Lane can’t have been as serious as first thought, as news broke on Wednesday morning that he was training with his teammates.

See below Sky Sports News’ coverage of the news as it broke, with this being an immeasurable boost to Arsenal’s hopes of defeating Slavia Prague and progressing to the next round of the Europa League.

Bukayo Saka is in full training and available for selection in Arsenal’s Europa League game against Slavia Prague pic.twitter.com/0NGBBx2urf

It has seemed for several stages of the competition that Arsenal and Manchester United are on a collision course. Neither side can get ahead of themselves just yet, though.

asIf Arsenal win on Thursday, they will face the winner of Villerrael vs Dinamo Zagreb, which could see them drawn against former manager Unai Emery. What a story that would be.