Neymar opted against keeping it classy after PSG win over Bayern Munich, instead choosing to celebrate in the face of Joshua Kimmich.

While PSG were defeated on the night against the European champions, the three away goals they scored at the Allianz Arena proved sufficient to take them through to the semi-finals, thanks to their resolute defending at the Parc des Princes.

Neymar stole the headlines from teammate Kylian Mbappe with a stunning, man of the match display on the night, before capping it all off with a moment which he’ll probably not reflect on with a great deal of pride. 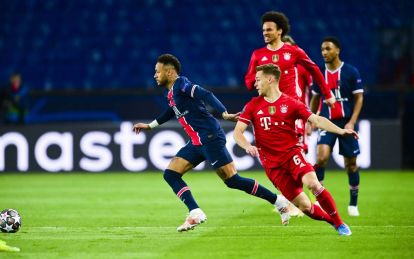 Neymar was at his very best for PSG against Bayern Munich.

Whether it was the emotions running high, or Kimmich had said something which didn’t sit right with Neymar, the PSG talisman celebrated right in the German midfielder’s face after the full-time whistle had blown.

With Bayern having been knocked out of the competition, this is the last thing that Kimmich would have needed.

What a game. What a player. pic.twitter.com/c1R57LWpoU