This Premier League season has been a topsy-turvy one for Chelsea.

The Blues were initially at their swashbuckling best under former manager, Frank Lampard, before the ex-midfielder was sacked for an underwhelming run of results.

Since Thomas Tuchel has taken over, the west Londoners have looked a lot more cohesive as an outfit and are on the verge of another Champions League final, if they can beat Real Madrid over their two-legged semi-final.

That would set up a showpiece with Tuchel’s ex-employers, Paris Saint-Germain, or Pep Guardiola’s Manchester City. 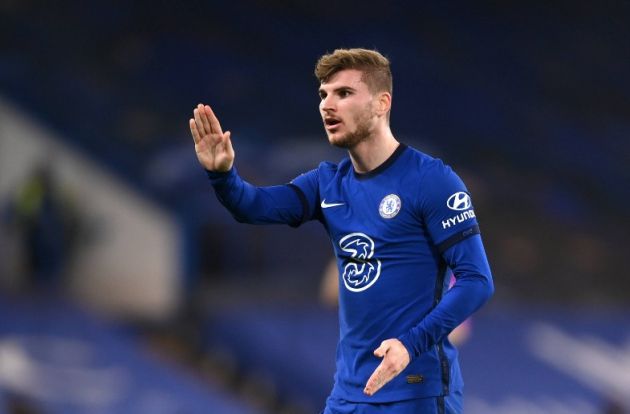 Timo Werner in action for Chelsea.

In order to get there and to finish the Premier League season as strongly as possible, the German will need all of his star players to be fit and firing, and that’s not something you could say about Timo Werner this season.

In fact, former Tottenham star, Rafael van der Vaart, has delivered a brutal assessment of the striker’s first season in the English top-flight.

“I would always play Ziyech because he is the best,” he told Ziggo Sport, cited by Sport Witness.

“Ziyech comes inside and also gives the cross, just like Mount. Giroud needs that.

“He’s [Werner] super-fast, and that might be nice in an away game when you’re under pressure, but it’s just putting your head down and running around.

“Mount is a great footballer, who I do think needs to make a step up. I compare him a bit to Calvin Stengs; you have to become a man.

“Werner is really a blind horse. He has already proven that in Germany.”

Though the Dutchman’s sentiments are understood, he could’ve delivered them in a more understated and tactful manner.