Jurgen Klopp may well have seen his Liverpool side knocked out the Champions League by Real Madrid last night, but as per Don Balon, he’s not prepared to leave the tie completely empty-handed.

Klopp’s men have endured a forgettable season, with the title defence that they posed one of the worst that has been seen in the Premier League era. The Champions League provided an opportunity for retribution for their underperformers.

MORE: ‘Just walks around the pitch’ – These Liverpool fans want star ‘gone’ after performance vs Real Madrid in angry reaction

However, it was one which they were unable to take, with Real Madrid simply too strong over the two legs, despite Los Blancos being without several key players, notably Sergio Ramos.

All in all it was a disappointing 180 minutes for the champions, but if Don Balon are to be believed, Klopp is intent on having something to show for it, despite Liverpool no longer being in the competition.

The Spanish publication claim that Vinicius Jr, who was arguably Real Madrid’s most effective player in the tie, has landed himself on Klopp’s transfer radar as a result of his good performances. 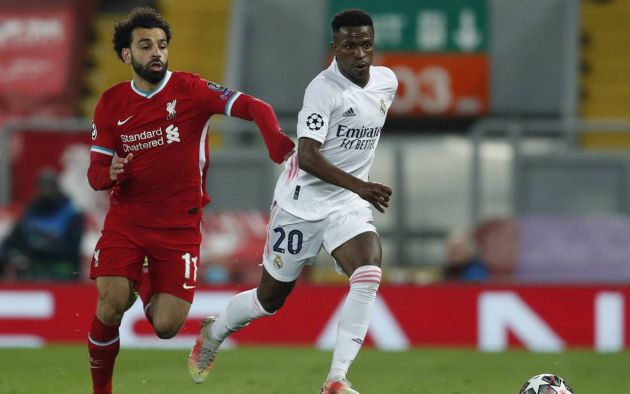 Vinicius netted a brace during the first-leg in Madrid, and with Klopp’s forward line dropping below expectations this term, it would come as no surprise if he wanted to add that sort of firepower to his attack.

Don Balon report that Vinicius is considered untouchable by Real Madrid, which comes as no surprise, in truth. Yet, considering how unfavourable the financial climate is, in the midst of the coronavirus pandemic, if Florentino Perez did want to fund a deal for a player such as Kylian Mbappe or Erling Haaland, he may well have to sell to buy.

Though, whether Vinicius would find himself on the chopping block remains to be seen.

The Brazilian is comfortable playing on either the left or the right of attack, meaning his arrival could facilitate Mohamed Salah’s move to a central position or provide a replacement for the struggling Sadio Mane.

Either way, he looks like it would be a good addition to Liverpool’s squad, at least on paper, with the only problem being the unlikelihood that they will be able to strike a deal to sign him – which, in fairness, is a pretty considerable problem.