Arsenal have had plenty of issues over the years where they’ve been forced to sell players due to their contract situation, but it looks like their luck may be starting to change.

The biggest boost came with renewed hope of Folarin Balogun staying at the club, but there’s more good news on the horizon when it comes to another young star.

Kido Taylor-Hart is still at U18 level so it could be a couple of years before he starts to push for a first team role, but the club have recently been making efforts to tie him down:

? Taylor-Hart yet to sign a new deal and there is concrete interest in him from some big teams across Europe.

? He's starting for the U-18s in their #FAYouthCup match against West Ham tonight. https://t.co/fVvtmu5caU

It will be worrying to hear that other big clubs are interested because it can lead to unrealistic wage demands from a young player, but there may have been another development today.

The player took part in a live video session earlier today, and fans have noticed that one of his teammates has congratulated him on signing a new deal:

It could just be a wind-up between the players who know that it’s going to attract attention, but this does suggest he will commit his long-term future to the club. 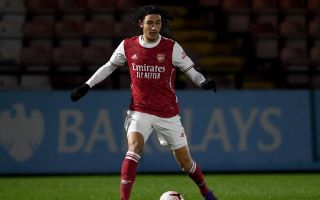 Transfer offers flooding in for Arsenal ace as they scrap to tie him down to new deal May 9, 2021 7:33
Arsenal FC