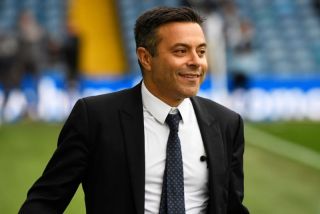 Speaking out on today’s big news on Twitter, Radrizzani made it very clear where he stood as he showed his support for the fans who will be heartbroken by the news.

“Absolutely against the sporting spirit, the dream of millions of fans to conquer the championships on the field, with planning, vision, work,” he said.

“Kill dreams of club players and fans. The teams are fans and WE are the keepers.”

This perhaps isn’t a perfect translation of the Italian’s tweet, but it is obvious enough to most that he isn’t supporting the idea.

Leeds take on Liverpool in the Premier League this evening in what will now be an even more intriguing contest.

Liverpool are one of the six English clubs signing up to join the new breakaway competition, along with Manchester United, Manchester City, Arsenal, Chelsea and Tottenham.