Former Manchester United midfielder Ander Herrera has become one of the most high profile current players to explicitly state his opposition to a European Super League.

The Paris Saint-Germain midfielder has tweeted a heartfelt statement insisting that a Super League was not the way forward and would ruin football for him.

See below for his statement in full… 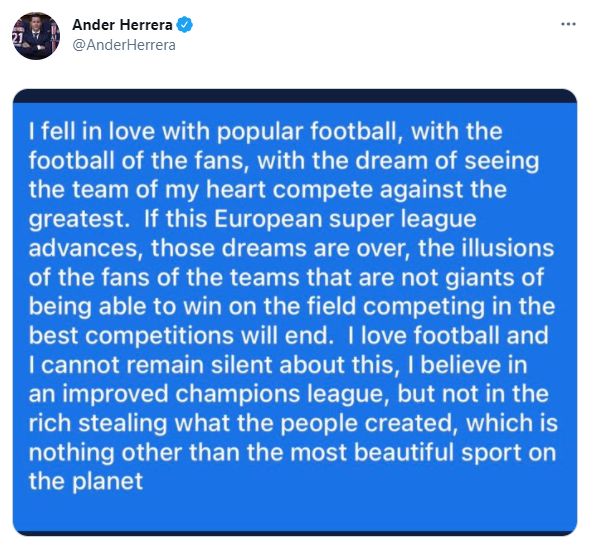 It’s nice to see a player taking such a strong stand, and unsurprisingly this has led to Man Utd fans heaping praise on him in the replies.

Herrera was a key player for the Red Devils before joining PSG, and he is clearly still popular at Old Trafford.

United are currently one of the founding members of the proposed Super League, along with other big names like Real Madrid, Barcelona and Juventus.

PSG are not involved at the moment, however, and it seems Herrera would not be prepared for his club to join these other sides in the breakaway competition.

Dejan Lovren is another active player who seemed to hit out at the plans, though he did not mention the Super League specifically…

Football will be in the near future on a brink of complete collapse. Nobody is thinking about the bigger picture, only the financial side.

I still believe we can solve this unpleasant situation.

Don’t forget to let us know your thoughts in the comments and in our series of polls in the thread below!