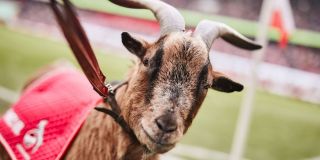 Football clubs from all over the world have been sending their well-wishes to FC Koln after the Bundesliga side confirmed the passing of their beloved mascot, Hennes VIII the goat.

The animal served as the club’s mascot between 2008 and 2019 and was fairly well known throughout the wider football community.

Other teams – from Bayern Munich to Barrow AFC – have been sending their regards to Koln via Twitter – you can see a few of the tweets below.

A domesticated goat will typically live for around 15 years, so it’s fair to say Hennes enjoyed a good life and will be remembered by football fans, especially those of FC Koln.

Hennes IX is the current mascot of the Bundesliga club, taking over from his predecessor in 2019 due to declining health.

The male goats were first introduced as a joke by a local carnival, but FC Koln embraced the gesture, naming the animal after a former player, and making it the club’s official mascot.