If clubs thought the fall-out from the Super League fiasco couldn’t get any worse, they need to think again.

The entire scenario, from the way in which it was initially handled, to the embarrassing climb downs from the Premier League clubs in particular, has been a lesson to all involved as to how not go about looking to form a breakaway league.

It does appear that sooner or later, something approaching the Super League model will come to fruition but, for now, supporters of those clubs that were due to be involved, have made their intentions clear.

Since the Super League was put on hold, each club has issued grovelling apologies, however, in Arsenal’s case, they’ve managed to make what was already a PR disaster for them, even worse. 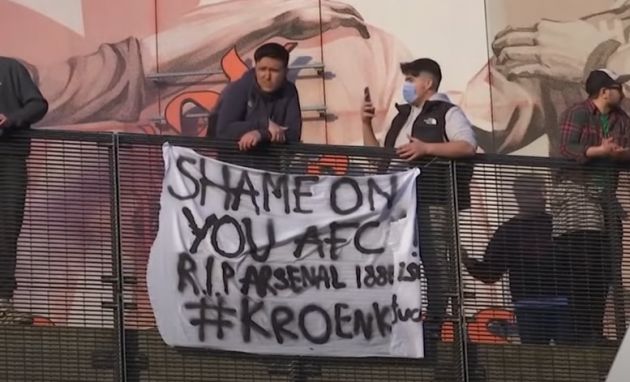 Josh Kroenke, son of owner, Stan Kroenke, partook in a call with irate supporters groups and chief executive Vinai Venkatesham, but made a real hash of trying to smooth things over.

“Leadership is about recognising when you are wrong, correcting and apologising,” said Kroenke, cited by the Daily Mirror.

“We also asked ourselves what do the fans want? The global fan wants Arsenal vs Barcelona as often as possible. English fans want to see more big matches, but you still want your cold nights in Stoke.

“We got it wrong. It was never our intention to harm English football.

“We can talk FFP, about racism, but for football pyramid stability we need to ensure we are maximising revenue, but we went about it the wrong way on this occasion.”

“I am well aware we have never really had trust and what teeny bit of hope there was among a small fan group that KSE would take it forward, I know that has been shredded as well.”

Talk about an own goal.