No squad in world football could’ve dealt with some of the injury luck that Liverpool endured this season, but they still would’ve needed some further depth even if van Dijk and Gomez had stayed fit for the entire season.

There have been links to almost every defender in Europe as a result, while it’s still not clear what they plan to do with Ozan Kabak at the end of the season.

One of our reporters broke the story a few days ago that the deal to sign Ibrahima Konate from RB Leipzig was set to be confirmed, and that’s just been repeated by Fabrizio Romano as well:

Ibrahima Konaté to Liverpool, here we go soon! The deal is set to be completed, personal terms agreed on a five-years contract.

Liverpool will pay the release clause to RB Leipzig in the next days [around €35m] in order to finalize the signing of Konaté. ? #LFC https://t.co/N4OWqqXiGu

The 21 year old has been impressive this season and he may have gone slightly under the radar due to Dayot Upamecano playing in the same team, but he has everything that you want in the modern defender.

He’s big and physical so he can deal with an aerial threat, he’s quick enough to cover in behind and he’s good on the ball so he can build from the back as well.

It’s a shame for Leipzig to lose their two starting CBs in one summer but they don’t have a choice due to the release clause, and he looks like he could be a great signing for Liverpool and the future of their defence. 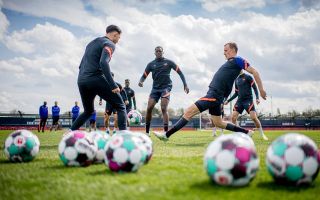