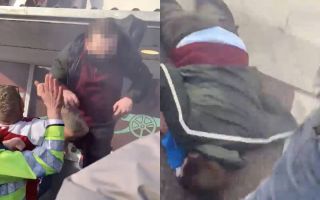 While fans have a right to protest in wake of the European Super League fiasco, and in some cases should even be encouraged to do so – please, be careful.

When heading to a protest, take a mask. When partaking in the protest, socially distance as much as is possible. Be careful around flares, hold your breath if there’s smoke bombs, and though it should go without saying, don’t fall off a roof.

Arsenal fans, protesting in their masses outside the Emirates yesterday evening, could be accused of getting a little carried away. Emotions were running high, they wanted Stan Kroenke to get the message, that can be completely understood.

However, putting yourself in precarious positions, and ultimately ending up injured as a result, cannot be justified.

If you needed reminding of the risks of getting carried away in this sort of environment, have a look at what happened to this Arsenal fan as he attempted to follow the orders of a Metropolitan Police Officer and descend from a roof outside the Emirates.

I don’t get involved with Arsenal stuff on Twitter, but i thought this was a good un worth sharing ? pic.twitter.com/ZvqPdGzIz3

We dearly hope that the fan in the video is okay and will make a full recovery. That was a hefty fall.

The video ought to act as reaffirmation of the need to be careful at these protests. While we all want the same thing, it’s not worth compromising your health to be a part of the movement.