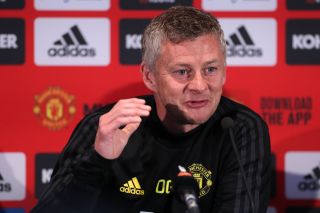 Solskjaer was asked whether he was ‘concerned’ at the fact that the club’s now failed attempts to be a founding member of the European Super League would ‘detract’ from the big games they’ve got left.

The journalist also questioned whether the outrage towards the owners would have an impact, after a ‘Glazers Out’ banner was flown before the match and an American flag burnt at protests yesterday.

Solskjaer insisted that he is ‘really happy’ with the players’ focus, as well as their ‘determination’ to finish strong as they just have the Europa League trophy left to play for.

See More: ‘I’ll even take a loss on him just get him out’ – These Man United fans want ‘useless’ star gone after display vs Leeds

Ole Gunnar Solskjaer is ‘really happy’ with the ‘focus’ and determination that the Manchester United players are showing after the draw against Leeds… pic.twitter.com/9lUtsBQrCm

“You know, I’m really happy with the boys’ focus, they have such a determination to finish strong.”

“Of course, the European disappointment, the last game of last season (Sevilla), that still sticks in their minds and hearts, so we’re very, very focused to do well against Roma.”

“Then we’ve got Liverpool in between, so I’m not worried about that at all.”

Solskjaer reiterated that he’s ‘not worried’ about the players’ mental focus as they prepare for another pair of massive fixtures, with the knockout tie against Roma followed by a clash against rivals Liverpool.

It will be interesting to see how the club’s supporters react to these comments, as maybe they’d like for the players to actually be focusing and voicing their opinion on the massive decision the ownership took that brought the club’s illustrious name into disrepute.

Also, some fans may not agree with Solskjaer’s assessment on their ‘focus’ and ‘determination’ after a lax performance today, which has been far too common this season.