Chelsea are being linked with some huge potential transfers this summer, so we thought we’d take a look at some of their rumoured targets and how they could fit in to Thomas Tuchel’s XI for next season.

The Blues have made a great start since Tuchel replaced Frank Lampard as manager, but it seems clear there are still areas of this squad that need to be addressed ahead of next season.

Chelsea don’t seem too far away from being genuine Premier League title contenders, but it’s not too surprising to see them seemingly preparing for another busy summer after some of their purchases from last year didn’t really work out.

First up, there’s growing talk of a big bid to re-sign Romelu Lukaku from Inter Milan, with the Sun claiming he’s a top target for Tuchel’s side amid Timo Werner’s struggles.

The Germany international joined Chelsea from RB Leipzig last summer but has not lived up to expectations at all so far, with Lukaku sure to be an upgrade in attack, having proven himself in the Premier League in the past.

Another somewhat disappointing signing has been Hakim Ziyech, and El Gol Digital have claimed he could already be offloaded as part of a swap deal for CFC to land Sevilla centre-back Jules Kounde.

The young Frenchman has looked hugely impressive in La Liga in recent times and it seems clear he’s going to play for one of Europe’s biggest clubs before too long.

If Chelsea can get his price down by including Ziyech in the deal, that could be fine business to remove an unneeded player whilst strengthening a problem position, with a long-term replacement for Thiago Silva surely needed as soon as possible.

Chelsea could also make a splash for Borussia Dortmund wonderkid Jude Bellingham, with Eurosport recently linking the west London giants with an interest in the £100million-rated 17-year-old.

Bellingham is clearly one of the most exciting young players in world football right now and it would be great to see him back in England at some point, with Chelsea perhaps an ideal fit for him due to Tuchel’s playing style.

Finally, CaughtOffside understands a new left-back is also on the agenda for Chelsea this summer, with Villarreal’s Alonso Pedraza one of their targets.

Ben Chilwell hasn’t been entirely convincing since joining from Leicester City last year, so Tuchel might well be planning to bring someone else in to become first-choice next season.

If Tuchel is successful in landing these targets, here’s a look at Chelsea’s superb potential line up for 2021/22 – does this team look like a title-winning side in the making? 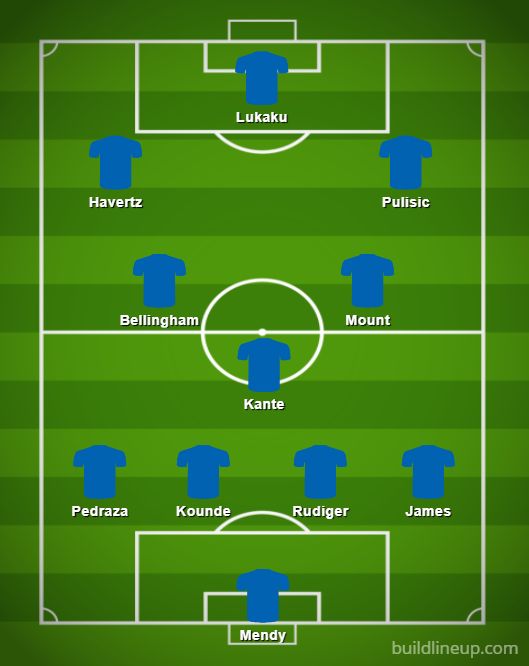