The brief was a fairly simple one. Beat Granada and Barcelona would top LaLiga for the first time in the entire 2020/21 campaign.

There can’t be too many seasons where the Catalans haven’t sat atop the tree at any stage, but after a shocking loss to Granada on Thursday evening, that’s something they could be looking at with just five games left.

Manager, Ronald Koeman, needs to take a large portion of the blame for yet another defeat in a big game.

So far, only the Copa del Rey final against Athletic Club, has seen Barca perform to anything like what they’re capable of. 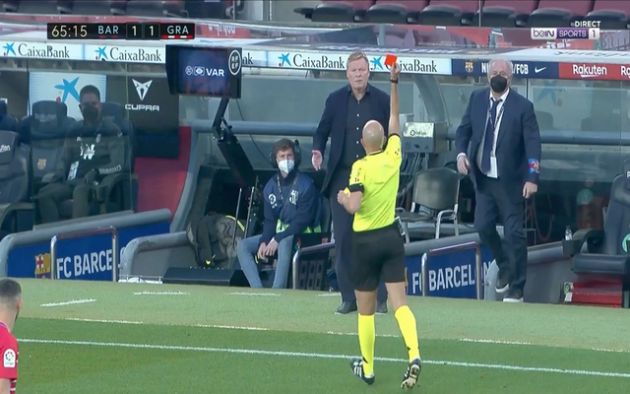 Every other time the stakes are high, Koeman has been unable to mastermind a victory, and the match against the Andalusians was the worst example yet.

Barca were cruising in the first hour thanks to a goal from Lionel Messi, but the Dutchman’s rotations were doomed from the beginning.

Sure enough, Samuel Umtiti, who should be nowhere near the first team at present, was at fault for both goals which saw Granada earn their first ever victory at the Camp Nou.

Substitutions were either far too predictable or, as he’s done at other points this season, far too late to affect proceedings for Koeman.

The destination of the title was in Barca’s hands, but now they’ve got to win all five of their remaining games and that still might not be enough.