Dayot Upamecano has explained his decision to seal a transfer from RB Leipzig to Bayern Munich this summer.

The France international has long looked one of the finest defenders in Europe after some hugely impressive form with Leipzig, and it’s no surprise he’s now set for a big move.

It was recently announced that Upamecano would be joining Bayern at the end of this season, though Fabrizio Romano previously stated that the likes of Liverpool and Chelsea were also interested in him… 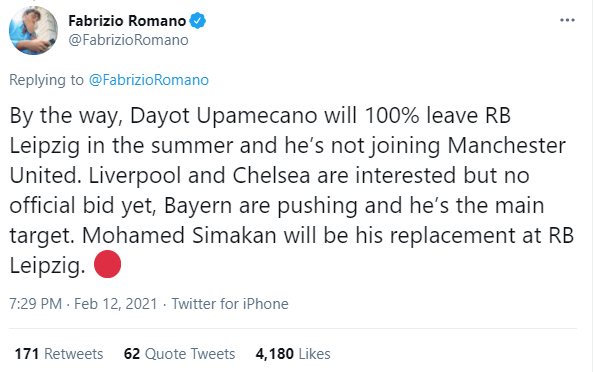 Upamecano would undoubtedly have been a fine fit for Liverpool right now due to their shortage of centre-backs, though CaughtOffside understands they’re closing in on his Leipzig team-mate Ibrahima Konate instead.

Chelsea could also have done with landing the 22-year-old, with the Blues in need of a long-term replacement for the ageing Thiago Silva, as well as upgrades on inconsistent performers like Antonio Rudiger, Andreas Christensen and Kurt Zouma.

Still, speaking with Sport Buzzer, Upamecano says he wanted to stay in the Bundesliga despite offers from abroad.

Fabrizio Romano gives the latest details on Ajax star who is wanted by Inter Milan
Video: David de Gea furious at Harry Maguire as his error nearly leads to a goal for Villa vs Man Utd
Injury worry for Chelsea as star subbed off in first half vs Man City

“I was sure relatively quickly that I wanted to stay in Germany and in the Bundesliga. I like it here, the level of the games, the fans, the stadiums,” he said.

“And when FC Bayern gets in touch, you are really proud. It doesn’t get much higher, especially if you’ve played in Leipzig before.”