Tonight is a huge game in many ways for Real Madrid, but mainly because it could be the final chance to win the Champions League for a few of this squad.

They have veteran players who are either approaching the end of their career or their contract, so Real could enter a transition period over the next couple of seasons.

For most teams that will involve accepting a down period as they look to rebuild, but a report from AS suggests they actually plan to throw some money at their problems instead.

It may take a couple of years to pull both of these deals off, but it’s reported that Kylian Mbappe is now seen as attainable this summer after PSG’s loss last night, while Erling Haaland is expected to arrive in the summer of 2022 as they overhaul their forward line.

Interestingly there is a situation where the timing of these could flip, as Haaland may look to leave this summer if Dortmund fail to qualify for the Champions League this season, so Real would be willing to take him now and then sign Mbappe for free in 2022 as his contract expires.

Either way it appears that they’re confident that both deals can and will be done, so here’s how they could line up in a couple of years based on their current squad: 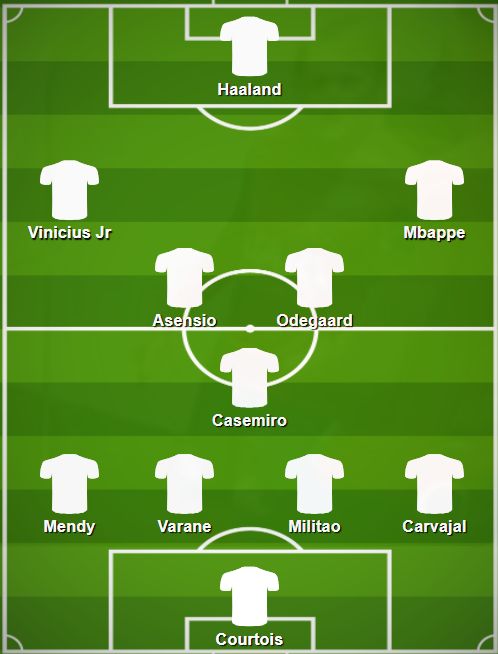 It’s likely that Eden Hazard would leave if Mbappe arrives, while Karim Benzema still has at least one more year left in him so he could occupy the number 9 role for a year until Haaland completes his move too.

There are more options in the midfield with Valverde and Isco to provide the rotation alongside Kroos for another couple of years, although they may look to add a better rotation option than Rodrygo up front.

Vinicius Jr is still a bit inconsistent but he’s supremely talented and will get better, so a front three containing him, Mbappe and Haaland could be truly unstoppable.