Speaking exclusively to CaughtOffside, Hudson said he was hugely impressed with Kai Havertz, N’Golo Kante and Mason Mount, all of whom undoubtedly played key roles for Chelsea in their Champions League semi-final success.

Chelsea’s goals over the two legs came from Christian Pulisic, Timo Werner, and Mount, but Kante was undoubtedly one of the most important players in the tie as he was named man of the match in both games.

Hudson did not hide his admiration of the Frenchman as he showed his very best form at this crucial time for Chelsea.

“He (Kante) is a manager’s dream, and has been messed around by the last two managers,” Hudson told CaughtOffside. “Now he is back to the player who played for Leicester and was so invaluable in their Premier League success.

“By keeping Luka Modric quiet for 180 minutes Kante showed that simplicity is genius by going about the job at hand.”

Hudson also expressed joy at the improvement shown by Havertz under Tuchel, with the Germany international thriving in a more advanced role and drawing comparisons with Dimitar Berbatov.

“Havertz is a different player since being moved further forward by Tuchel. Real Madrid could not handle him in the second half,” Hudson said.

“He said once he doesn’t want to be compared to anyone, he most certainly looked the real deal in the set 45 minutes when Chelsea needed him most. Berbatov was a very special talent, as is this fella, but we really don’t know just how far this Havertz can go. 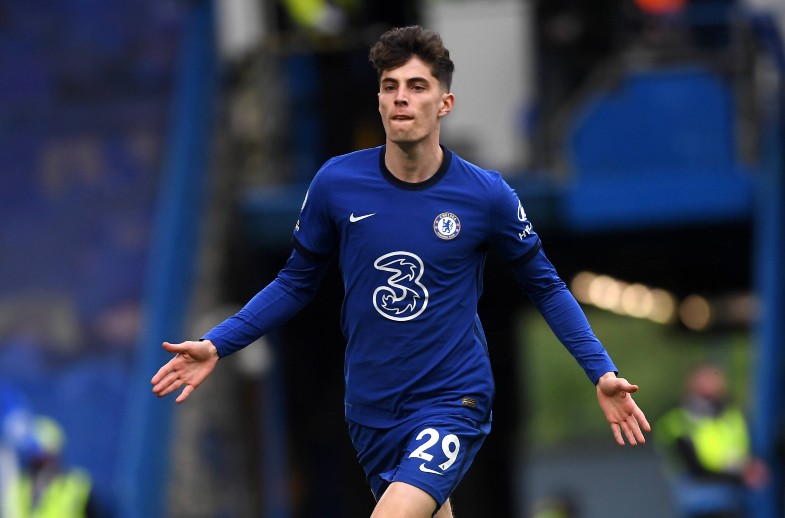 Kai Havertz has shone for Chelsea under Thomas Tuchel

“He’s coming along slowly but I get the feeling he has far more in his locker.”

Finally, Hudson also praised the way Tuchel has handled Mount, as well as the response from the player himself.

“Tuchel’s handling of Mount has been key to his progress,” Hudson said. “Putting no pressure on him, and now by playing it down Mount is growing up slowly.

“Sometimes you build up a young player and put pressure on them but the manager has left him alone to do his thing.

“Mount is gifted and grounded and willing to learn off his elders.”