Arsenal manager Mikel Arteta came locked and loaded with excuses for his post-match interview following the Gunners’ exit from the Europa League.

The Gunners, who headed into tonight’s game knowing that their season would effectively be over unless they progressed in the competition, were unable to break Villarreal’s resolve and overturn the 2-1 first-leg deficit.

As a result, Arsenal were knocked out of the Europa League, meaning the club are set to miss out on European qualification for the first time since the 1995/96 campaign, which doesn’t bode well for Arteta. 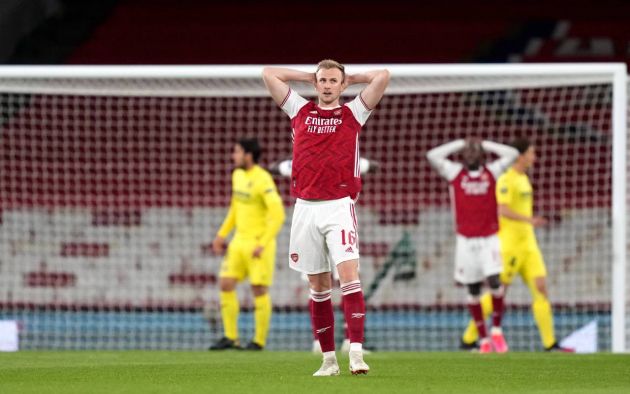 Arsenal were knocked out of the Europa League after a 0-0 draw with Villarreal.

Arteta is the man who will be under the spotlight in wake of this defeat, especially considering how disappointing Arsenal’s season has been as a whole. However, he’s ready to fight back against the criticism.

Speaking to BT Sport in wake of the game, Arteta rolled off a list of excuses, from the late change, with Granit Xhaka ruled out at the eleventh hour, to it being a young team and even Pierre-Emerick Aubameyang having malaria.

This isn’t going to do him any favours winning around the fans, is it?

“We are devastated, really disappointed.”

“We’ve had so many players injured. Too many important players that help to define the game.”

“I feel the pressure all the time because I want to do as good as I can.”