Hazard, who is a Chelsea legend and obviously has a great deal of affection for the Blues, even since departing, was caught laughing and joking with former teammate Kurt Zouma before heading down the tunnel and back to the Real Madrid dressing room.

The Belgian was caught by the cameras doing so, which was a schoolboy error, because he surely could have predicted how the Real Madrid fans would react to him beaming just a matter of minutes after they were knocked out of the Champions League. 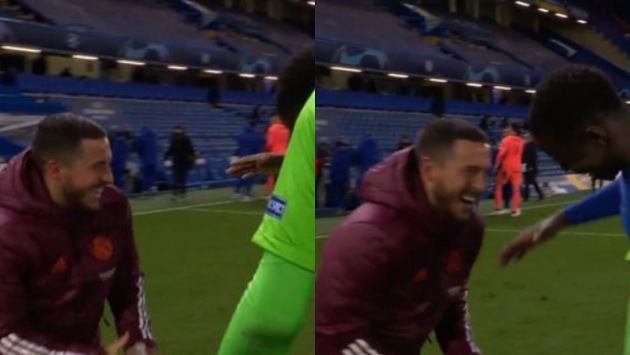 Much has been made of the situation, with THAT clip from Madrid based football programme El Chiringuito going viral.

Whether or not there will be consequences for Hazard as a result of his behaviour remains to be seen, but several ex-professionals, speaking on CBS Sports’ coverage of the Europa League, reflected on last night and were not best impressed with the 30-year-old and the naivety on display.

Here’s the thoughts of Alex Scott, Jamie Carragher and Peter Schmeichel, all of whom have found themselves in the same position as Hazard, playing against friends of theirs, and none of whom were impressed by the way he did it in front of the cameras.

“You know to wait when the cameras aren’t there or go and speak to them after the game in the locker room.” @AlexScott, @Pschmeichel1, and @Carra23 give their take on Eden Hazard with his Chelsea teammates after the #UCL semifinal ? pic.twitter.com/eMmih5eAy8