Karim Benzema thought he’d given Real Madrid the lead over Sevilla in their potentially pivotal clash in La Liga, but the goal was ruled out for offside.

In wake of their exit from the Champions League to Chelsea midweek, bouncing back with a win over Sevilla, especially with Barcelona and Atletico Madrid having drawn 0-0, would have been the ideal response for Zinedine Zidane’s men.

Real Madrid almost got off to the perfect start, too, with goal-machine Karim Benzema having found the back of the net with his head, with Alvaro Odriozola having whipped in a brilliant cross.

While the pair thought as though they’d combined for the opening goal for Los Blancos, replays showed that Odriozola had strayed offside while running down the right channel in the build-up.

In the age of VAR, with the lines being drawn, he was never going to get away with this one, much to Zidane’s dismay. 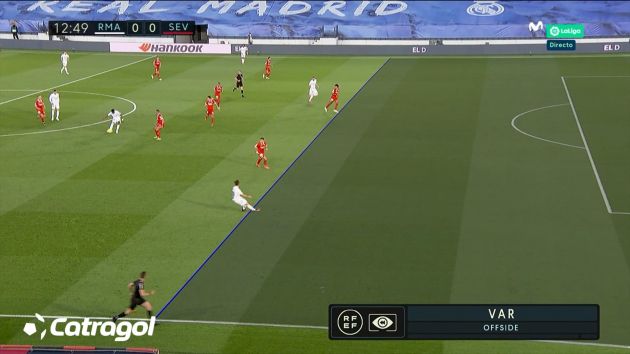