Manchester United keep being linked with the same old names – one day we hear that Harry Kane is a top priority, the next day it’s the Jadon Sancho transfer saga popping up again.

The Red Devils might well have signalled, however, that they’re happy with their current options up front, however, with Edinson Cavani’s contract extension announced following a superb run of form in front of goal.

MORE: Manchester United did something no Premier League team has ever done with comeback win against Aston Villa

The Uruguay international has probably surprised just about everyone with his tremendous impact at Old Trafford, and it seems clear now that he surely has at least one more year in him.

Some fans will surely feel that doesn’t negate the need for a 30-goal-a-season centre-forward like Kane, while others might point to the Sancho signing as ideal to give Cavani better ammunition from out wide, as he’s more of a natural winger than the likes of Marcus Rashford, Anthony Martial and Mason Greenwood.

Could it be possible that United could actually sign a player who gives them the best of both worlds? A reliable goal-scorer from out wide, a hard-worker with pace, quality, composure and an awareness of his team-mates that has seen him form part of one of the finest attacking partnerships in Europe this season?

That player is Son Heung-min. So often overshadowed by Kane’s excellence at Tottenham, the South Korea international is surely one of the most underrated players in world football right now, and indeed has been for some time.

Son has been at Spurs since 2015 and has been remarkably consistent in that time, netting an impressive 107 goals in 277 games for the club in all competitions, getting double figures in all but his first season at the club, and past the 20-goal mark three times.

This season, Son is level on Premier League goals with another player who gets far more attention, Bruno Fernandes, but has the best conversion rate and shot accuracy of those top four scorers currently competing for the Golden Boot… 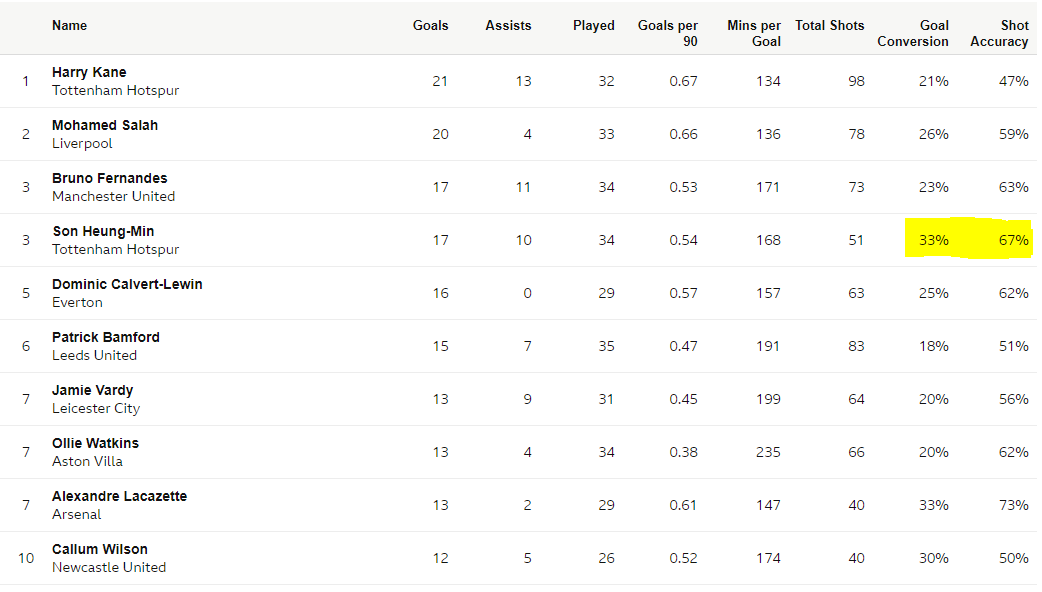 Son also has ten assists to his name this season, so one can only imagine the damage he could do alongside the likes of Fernandes and Cavani at United, who tend to play a more attacking brand of football than Tottenham have this term.

It must be said, the 28-year-old might also have the bonus of not being as injury prone as Kane has been in recent times, with some sign that the England international has been a little overworked by Spurs, who have been so reliant on him.

It’s not clear how much Son might cost, but it’s easy to imagine Tottenham wouldn’t view him as absolutely unsellable in the way that they might with their top scorer and homegrown favourite.

Of course, there’s always the risk that letting Son go to United or elsewhere would not exactly help Spurs keep Kane, who may already be wondering if he’d have a better chance of winning trophies elsewhere. He and Son have linked up brilliantly this season and it would take some investment from the club to replace such an influential player.

That’s not United’s problem, though, and it’s a big surprise the Red Devils and other top clubs aren’t already looking at Son as a superb alternative to Kane and indeed other more glamorous names on the market this summer.