Willian, who signed for Chelsea in the summer of 2013, departed the club in the summer transfer window upon the expiration of his contract. Arsenal made their move, handing the Brazilian a three-year deal.

The 32-year-old has endured a truly dreadful debut season at Arsenal, with his superb free-kick against West Brom last time out his only goal in Gunners colours to date. 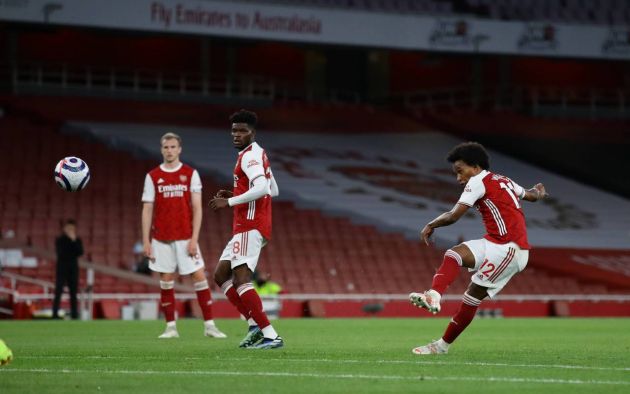 Willian scored his first Arsenal goal with a stunning free-kick vs West Brom.

You wonder, all things considered, whether he regrets not sticking around in SW6. He was settled, in a strong squad and evidently had some close friends there, too.

Willian paused his warm-up ahead of today’s game to trot over to the halfway-line and greet his former teammates, who were equally as happy to chat with him.

Willian catching up with a few of his old Chelsea teammates. Someone inform El Chiringuito! pic.twitter.com/45FuVbrCWK

Arsenal fans will be thankful that he didn’t quite go as far as replicating what Eden Hazard did at this stadium last week.

Hazard came under criticism for laughing and joking with his friends at Chelsea after Real Madrid’s exit from the Champions League.

Thankfully for Willian, the spotlight is not so much on your behaviour during the pre-match warm-up, especially when you’re not going to be starting the match.