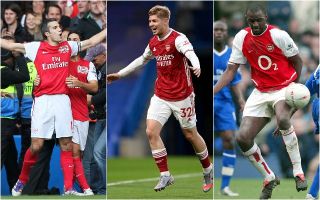 Arsenal are not known for having the best record in the games against the rest of the big six, particularly away from home.

They’ve also had some absolutely miserable times against Chelsea in particular down the years, with Didier Drogba bullying them almost every time they played, while Jose Mourinho also inflicted that humiliating 6-0 defeat onto Arsene Wenger in his 1000th match in charge of the Gunners.

No team has won more away games at Stamford Bridge in the Premier League than Arsenal (8).#CHEARS

Arsenal (34) have scored more goals at Stamford Bridge than any other visiting team in Premier League history.#CHEARS

Arsenal won 1-0 away at Chelsea last night thanks to Emile Smith Rowe’s goal from Jorginho’s error, and it certainly looks like Mikel Arteta knows how to win these big games better than his predecessors.

Arteta’s side also beat Chelsea at home this season, and in the FA Cup final last season, whilst also beating Manchester United at Old Trafford earlier on in the campaign.

Now if Arsenal can just work out how to beat the likes of Everton, Burnley and Wolves at home they’ll be onto something…