Man United’s squad doesn’t need a radical overhaul going into next season, but it does look like a few areas need to be strengthened.

Finding a top class centre back and attacker needs to be the priority, but they could also do with another option in the centre of midfield.

Paul Pogba looks like he could stay and sign a new contract although that’s still up in the air, but the biggest problem comes if he’s out as a combination of Fred/McTominay and occasionally Nemanja Matic isn’t enough for the elite level.

It’s unlikely that big money will be spent on the position because of the needs elsewhere, so AS have reported that Getafe midfielder Mauro Arambarri has emerged as a target.

He’s a clear star in the Getafe team and it’s suggested that he’s attracting a lot of attention going into the summer, while the 25 year old has a release clause of €25m so that’s more than affordable for United.

They go on to say that United have already reached out to his representatives, while it’s believed that Solskjaer is a big fan of his so there’s a good chance thay they’ll push for this move to happen.

He is move of a holding midfielder but he has the physicality to dominate while also being good on the ball so he could be an upgrade, plus he’s also capable of scoring the occasional screamer so that’s always a bonus.

It’s a signing that would go under the radar if it happens, but he could be a really solid addition to the midfield.

Man United have clear run at La Liga star as Valencia fall out of the race June 8, 2021 22:46
Manchester United FC 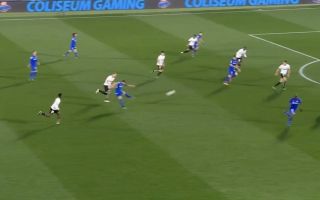