Manchester United midfielder Paul Pogba was on the FLOOR for three of Liverpool‘s goals at Old Trafford last night.

Pogba was not alone yesterday evening in doing himself an injustice with his poor performance in the derby. Man United were, quite simply, not at the races, with Liverpool taking full advantage.

However, what can be said for Pogba, and couldn’t in the case of other Man United under-performers, was that he was on his back-side as Liverpool scored three of their four goals on the night.

While Pogba was supposed to be working on preventing Liverpool putting the ball in the back of Dean Henderson’s net, but instead appeared to be having various siestas on the Old Trafford turf. 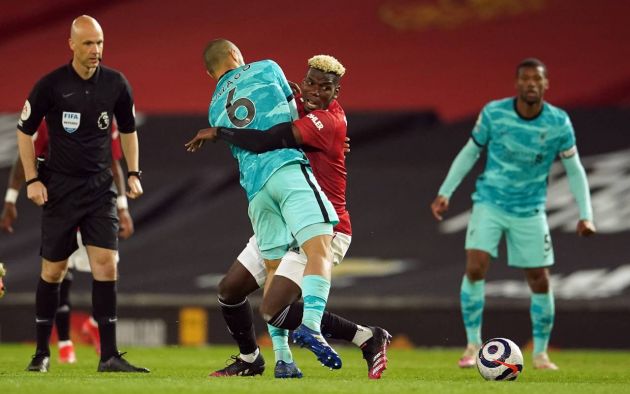 Paul Pogba could do nothing to prevent Man United being beaten 4-2 by Liverpool.

Neither Pogba or Man United as a collective covered themselves in glory last night, but with the Red Devils’ Champions League status for next season already secured, the defeat is hardly the end of the world.

The players will have had one eye on the Europa League final coming into the game. That’s the real prize on offer for Man United this term, even if a defeat against arch-rivals Liverpool will have been hard to take.

Click here for all the latest Man United news