It hasn’t even been a day since Gary Neville posted a rallying call on his social media to get those with an interest in having football independently regulated to sign a petition.

In a matter of hours, the petition has seen more than 85,000 people sign, which will mean that there’s some certainty to the matter being debated in parliament, given that only 100,000 signatures are needed to ensure that this occurs. 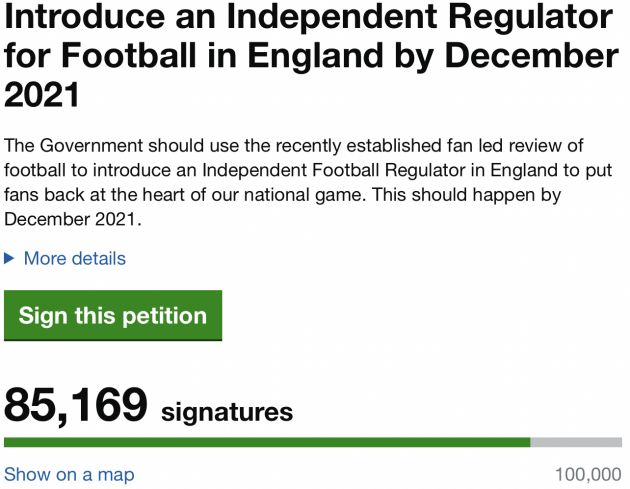 The Super League fiasco and the subsequent fall-out appears to be the driver for change, with Neville imploring fans of the beautiful game to make their voice heard.

The former England and Manchester United right-back suggests that there will never be a better time to push through an independent regulator, with supporters being at the forefront of the change.

Given that football was always known as the ‘working man’s game,’ Neville and his colleagues in this endeavour have clearly hit a sweet spot.

Roy Keane and Gary Neville agree over ‘scumbags’ amid Robin Olsen assault
May 23 2022, 7:06
Manchester City
Gary Neville issues verdict on Steven Gerrard’s potential impact on title race
May 18 2022, 8:08
Liverpool FC
Even Carragher is surprised as Neville describes Liverpool ace as “best in the league by a mile”
May 17 2022, 14:36
Liverpool FC
Video: Neville and Carragher disagree over three Liverpool players’ places in team of the season
May 17 2022, 14:13
Liverpool FC
“He’s been a disgrace” – Gary Neville slams Arsenal star for comments after Newcastle defeat
May 17 2022, 6:28
Arsenal FC
Gary Neville makes top four prediction after North London Derby
May 13 2022, 13:36
Tottenham FC
Neville slams Manchester United star who doesn’t have a “god-given right” to Old Trafford send-off
May 9 2022, 15:05
Manchester United FC
Carragher reminds Neville of hypocrisy over Man United manager claims
May 8 2022, 10:47
Liverpool FC
Video: Carragher and Keane spot a fan wearing a Gary Neville scarf – “There must have been a sale”
May 2 2022, 22:49
Manchester United FC
Steven Gerrard snubs Fernando Torres to name the best player he played with at Liverpool
Apr 14 2022, 14:34
Liverpool FC