Chelsea’s top ten earners have been revealed in a graphic created by The Sun, with an attacker who has four goals in 26 Premier League games occupying the top spot.

The Blues have fallen short of winning the Premier League, and the FA Cup, this term, but can still be crowned European champions if they defeat Manchester City later this month.

While Thomas Tuchel has done a fine job to take the team up a gear following Frank Lampard’s dismissal, he did inherit a squad which was constructed by hundreds of millions of pounds.

Those players who were recruited in big money deals are also earning big money on a weekly basis. Make no mistake, even if they win the Champions League, this is no fairytale story.

The Sun have provided insight into just how much some players at Chelsea are banking on a weekly basis, and who is earning the most, irrespective of their contributions to the cause. 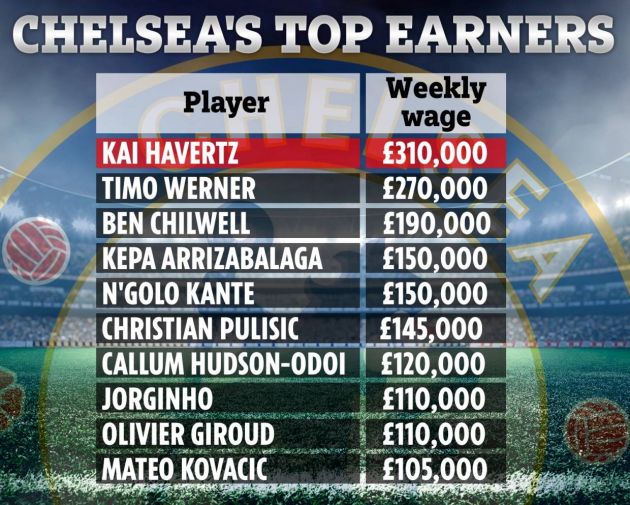 Graphic via The Sun

Kai Havertz, signed from Bayer Leverkusen in the summer, is just hitting his stride at Chelsea after a slow start. Four Premier League goals is a poor return for a £310K-a-week player.

The less said about Timo Werner, the better. It’s no wonder he’s still managed to keep a smile on his face throughout his barren debut season in West London with a £270K-a-week pay packet.

Kepa Arrizabalaga’s inclusion in fourth place is just further reason for Marina Granovskaia to prioritise his sale this summer, while it’s a surprise to see Callum Hudson-Odoi earning more than influential players such as Jorginho and Mateo Kovacic.

It’s a wonder that there’s no dressing room unrest at Cobham – because this is an absolute mess.