If you are anything like me as a fantasy football manager, you will be looking forward to the season finishing. Not because I have had a bad campaign – I am currently placed a respectable 2,667th out of an 8,228,714 going into GW38 – but because FPL has a tendency to take over my life.

But having come so far and spent countless hours studying the fixture list, I owe it to myself to try to finish with a flourish. And by sharing my tips, hopefully I can help other FPL addicts to do the same.

Before we look specifically at GW38 (Game Week 38 for the uninitiated), here are a few general tips I recommend if you want to have a strong season in future:

1. Fill up on full-backs

Overlapping defensive widemen have become more and more fashionable in recent years to the point that full-backs are effective the new wingers. So as well as being eligible for clean sheet points, these guys are more likely than ever before to chip in with assists and goals.

Also, from my experience, FPL’s bonus points system is particularly generous to full-backs.

Taking that -4 points hit for an extra transfer every now and again might not seem like much, but they soon add up. Do that 20 times a season and you will have lost 80 points before a ball has been kicked (quick maths).

It’s all well and good picking a team full of stars from best teams like Manchester City and Chelsea, but Pep Guardiola and Thomas Tuchel’s tinkering will soon have you crying yourself to sleep.

If you are spending a decent chunk of your budget on a player, you need to be confident he will play. So aim for the star men who rarely get rested and rotated, but are still frequent point-scorers. With this in mind, if I were picking my team for next season right now, I’d be straight in with undroppables like Andy Robertson, Trent Alexander-Arnold, Bruno Fernandes and Harry Kane (if he stays at Spurs… so maybe hold off for now).

4. Be bold when choosing your skipper

It sounds obvious, but pick a captain who you think could have a huge week, not just an okay one. I use the term ‘hat-trick potential’ when looking at attackers, but it could also be a midfielder who you fancy could get a goal and two assists. Basically, ask yourself: “Could this player get 15 points if he has a good day?” If so, he’s your man.

Never play it safe and captain a goalkeeper, like Ederson, because you think he’s nailed on to keep a clean sheet. Your realistic best case scenario here will only be six points doubled (he’s not going to get many save or bonus points if he has the quiet afternoon you were banking on).

I have been known to captain the odd full-back on occasion. I gave Trent the armband in GW4, hoping that he might get a clean sheet, a goal from a free-kick, an assist or two and three bonus points. The result? Liverpool shipped seven at Aston Villa and his -1 became -2. Oops. I’ve pretty much stuck with Kane and Fernandes ever since.

FPL does not differentiate between goals scored from penalties and those from open play, so filling up on spot-kick takers is a must, even more so since VAR is now handing them out like goldfish at a fair.

6. Let your chips cool down before you eat them

I recommend using the first of your two Wildcards just before it expires at the season’s midway point. And I wouldn’t use any of the other chips before Christmas. You will need them more in the second half of the season.

The second half of the season is always more unpredictable. Injuries are more common, as are fixture rearrangements due to clashes with cup competitions.

Try to save your Bench Boost and Triple Captain chips for a Double Gameweek and you may need to use that FreeHit when the FA Cup decimates the schedule, like it did in March this year – there were only five Premier League fixtures in GW29.

Salah has plenty to play for

Man City and Man Utd both have plenty of players who could provide points this week. The problem is it is almost impossible to predict who they might be due to likely squad shuffling with upcoming European finals top of their agendas.

Conversely, Liverpool, Spurs and Leicester only have Premier League matters on their minds and you can bank on the likes of Salah, Kane and Jamie Vardy starting.

Salah (£12.8m) and Co face Crystal Palace, who are partial to a thrashing by the Premier League’s big boys. They lost 4-0 and 4-1 to Chelsea earlier in the season, 4-0 at Man City, 4-1 at Spurs and were hit for SEVEN by Liverpool in the reverse fixture at Selhurst Park.

That 7-0 battering featured two goals from Salah, who has five in his last three vs Palace. He should be on penalty duty too.

Kane (£11.9m) is also a nailed on starter. Spurs have European football to play for and Kane will be double motivated for multiple reasons. Not only is he in the running for both the Golden Boot and the title of Top Assister, this could well be his final game for Tottenham and, if so, he will want to go out with a bang.

Kane has form against Leicester at this time of year too. In his two previous games against the Foxes in the month of May he provided six goals and an assist.

West Bromwich Albion have conceded more goals this season than any other Premier League side.

And on the final day, the leakiest defence in the league will come up against the side most committed to attack, in Marcelo Bielsa’s uncompromising Leeds United.

If you can, getting main Leeds striker Patrick Bamford (£6.6m) into your XI looks like a very wise move.

Although Burnley have taken a couple of heavy beatings this season, manager Sean Dyche just loves a clean sheet and has had the pleasure of seeing his side keep 11 so far.

In Sheffield United, Burnley face a side who will break Derby County’s record for the poorest attacking return in Premier League history if they don’t score. Matt Lowton (£4.4m) has played the full 90 minutes in Burnley’s last 33 games, while Ben Mee (£4.7m) has only missed one game since GW7. They look like the best bets for Burnley defenders, while I’d also recommend taking a punt on Chris Wood (£6.5m) at the other end.

Wood has the aforementioned hat-trick potential. Lest we forget, he bagged one as part of a 20-point haul at Wolves in GW33. The New Zealand international may not be the most fashionable forward, but he is very effective and plays for a team whose primary attacking aim is to feed him.

If I had the luxury of a Free Hit (I don’t as I cashed it in for the Double Gameweek in GW35), this would be the side I would pick for GW38: 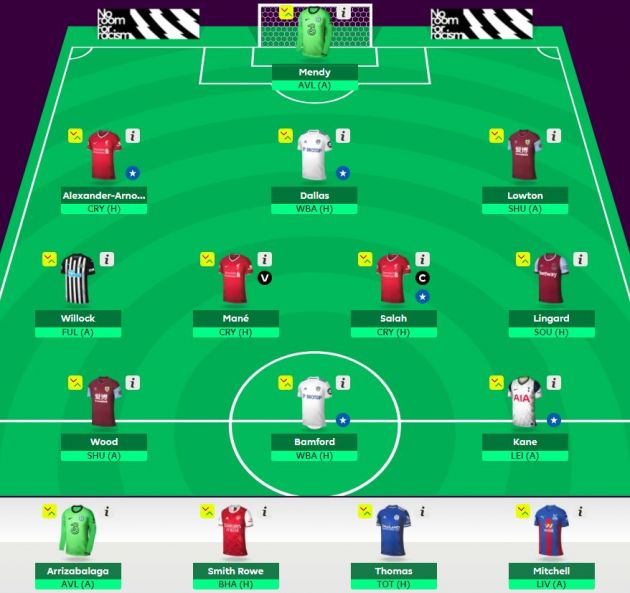 I am playing my Bench Boost in GW38. Not ideal. I simply held onto it for too long.

The plan had been to use the Bench Boost in the final DGW of the season but the Man Utd vs Liverpool abandonment in GW34 flummoxed me and prompted me to use my Free Hit in GW35 instead as I was short of United players for what turned out to be a Triple Gameweek for them.

Anyway, here are my 15 going into battle for GW38: 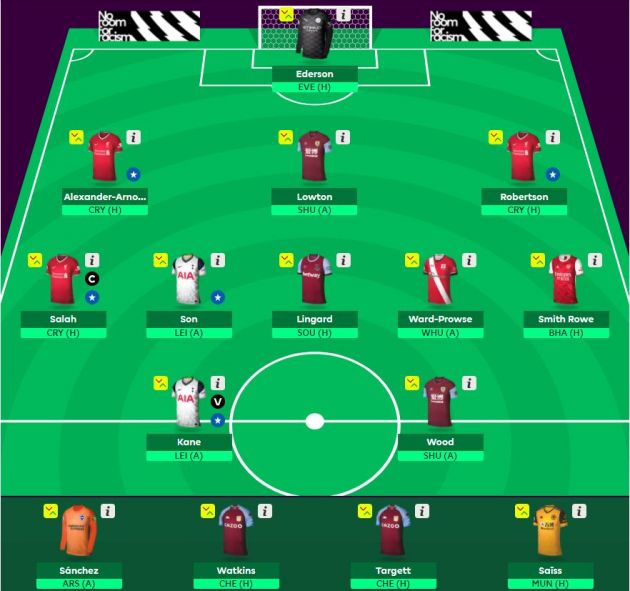