Everyone will have a different view on the best Premier League XI of the season, but the stats, arguably, do not lie.

So, here is how stats site WhoScored rate the best line up of the 2020/21 campaign, with a few surprises in there as Aston Villa have as many players in the team as champions Manchester City and runners-up Manchester United.

See below for the XI in full, with Villa goalkeeper Emiliano Martinez making it in after a superb season since leaving Arsenal last summer, while Jack Grealish and Ollie Watkins also make it in alongside big names like Kevin De Bruyne and Bruno Fernandes… 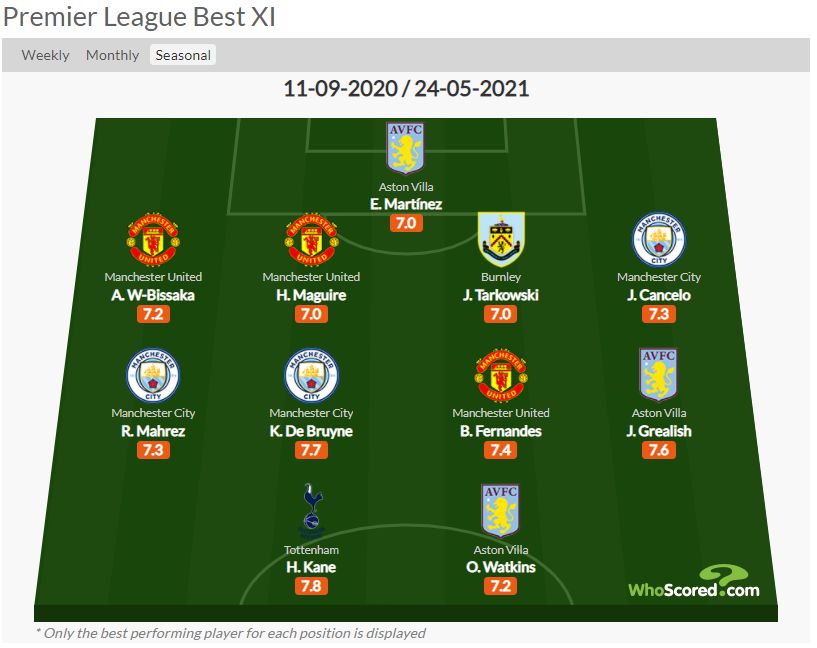 Of course, Golden Boot winner Harry Kane is one of the least surprising names to make the team after yet another fantastic season for him, though it could be worrying for Tottenham as it just makes it harder for them to keep hold of him.

Burnley’s James Tarkowski also deserves credit for his solid defensive displays seeing him earn a spot, while it’s also interesting that Man Utd right-back Aaron Wan-Bissaka is in there.

Neither Tarkowski nor Wan-Bissaka seem particularly likely to make Gareth Southgate’s England squad for Euro 2020 this summer, but perhaps their strong stats might get them an opportunity late on.

Overall, this is a very strong team, but some quality performers like Tottenham’s Son Heung-min, Man City’s Ilkay Gundogan, Chelsea’s Mason Mount and West Ham’s Tomas Soucek are among those who might feel aggrieved at missing out.