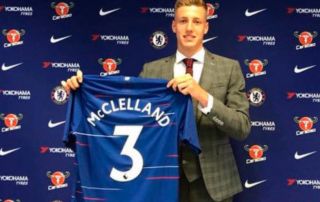 It’s not completely uncommon to see players making their senior international debut before playing for the first team at club level, but it does suggest they are very highly rated by the national side.

The BBC have reported that Chelsea defender Sam McClelland and Liverpool right-back Conor Bradley have been called up for the Northern Ireland squad which will take on Malta and Ukraine in their upcoming friendly matches.

Both players are a regular part of the U23 setups with their Premier League side but they haven’t made their senior debuts yet, but it’s suggested that the manager Ian Baraclough sees them as a major part of his future plans.

He also pointed out that he’s missing some players through injury and Arsenal loanee Daniel Ballard was also in line for a call-up, but he has a play-off final to think about with Blackpool and that is more important.

It’s not clear if the two kids will actually take to the field but simply being involved has to be a massive confidence boost for them, and it suggests they are two names to keep an eye on over the next few years.