According to Spanish publication AS, newly-crowned Barcelona president Joan Laporta will call Pep Guardiola on Sunday in an audacious effort to arrange the return of the tactician as manager.

AS report that Laporta is confident that he will be able to convince Guardiola to return from Manchester City, despite the 50-year-old publicly admitting that he will never sit on the Camp Nou bench again.

Laporta actually picked Guardiola for the Barcelona job during his first term as president, in arguably the best decision of his career as Pep went to achieve previously unseen levels of dominance.

AS report that Laporta isn’t necessarily hell-bent on appointing Guardiola for next season, with the La Masia graduate also seen as an option to manage the side from the start of the 2022/23 season.

That scenario would also save the cash-strapped club from having to pay out compensation to current boss Ronald Koeman. 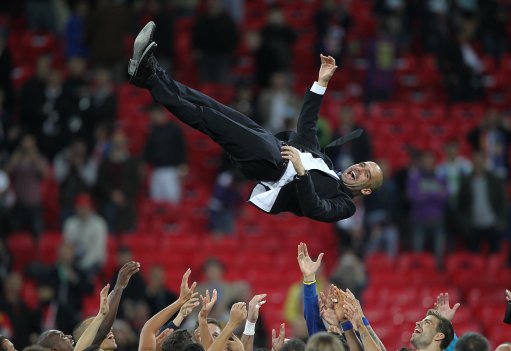 Guardiola is contracted to City until the summer of 2023 in a deal that was only recently renewed and contains the option of an additional year.

Guardiola has been very successful with the Citizens and is on the brink of achieving the club’s biggest ever triumph, with the side to face Chelsea in the Champions League final on Saturday night.

AS write that Laporta ‘wants to play all his cards in his bet on Guardiola’, it seems like the president will pull all out all the stops to try and win over Guardiola during Sunday’s phone call.