Rashford’s Man United side were unable to produce their best performance level in Gdansk, falling to defeat to Villarreal on penalties after what was a frustrating 120 minutes of action.

The England international himself didn’t look to be fully fit, as he hasn’t for several months now. Rashford appears to have grown accustomed to playing through the pain in order to help the cause. 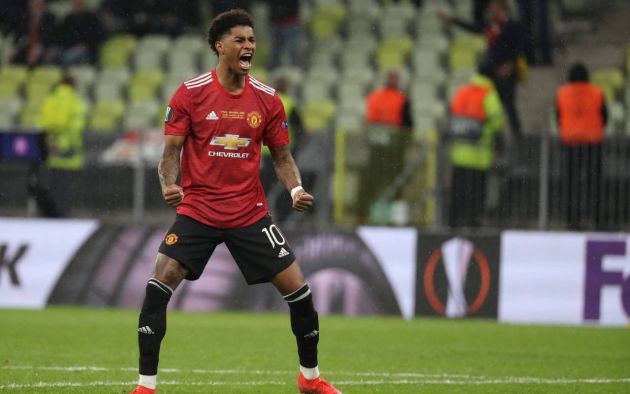 Marcus Rashford celebrates after scoring his penalty in the shootout

Unfortunately for Rashford and Man United as a collective, it wasn’t a wise decision tonight. The Red Devils were defeated, with Rashford having a difficult game on an individual level.

The 23-year-old was not prepared to hide away after the full-time whistle, though. He stuck around to speak to the BT Sport crew and address the Man United fans directly.

Rashford spoke passionately and eloquently, with his words surely going some way to ease the pain of the Man United supporters after a hugely disappointing night.

They’ll be back – he’ll make sure of it.

“The club, the desire, the hunger, the talent, the ability, the squad. We have everything to compete at the highest level.”

That one hurt Marcus Rashford.

A passionate post-match interview where he holds nothing back…