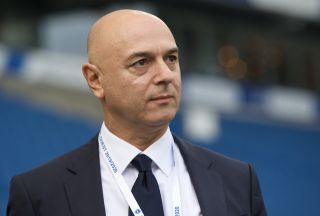 Tottenham Hotspur chairman Daniel Levy is prepared to go on record and declare that star striker Harry Kane is not for sale.

Kane has been the subject of widespread transfer speculation which was amplified by the striker’s recent revealing interview with Gary Neville.

It has also been reported by Sky Sports that the England international has told his club he wants out with both Manchester clubs and Chelsea rumoured to be in the hunt.

However, while those reports probably did not come as much of a surprise to fans, it is highly unlikely the 27-year-old will be allowed to seal a dream summer switch.

CaughtOffside has recently obtained exclusive information from a club source who revealed that chairman Levy is standing firm in his stance not to sell his star forward.

In fact, so annoyed with Kane’s decision to speak about his desires publicly, Levy is now refusing to answer any calls from the striker’s entourage, which includes his father, Patrick Kane.

We understand that any chances of a deal being reached have now disappeared with Levy preparing to declare his striker not for sale once the summer Euros start.