It’s understandable that a lot of Man United fans will be upset after another season of no silverware, but perhaps there could be some good that comes out of the Europa League final loss to Villarreal.

It’s shown the board that the current side isn’t good enough to win the Champions League or the Premier League, so there will be hope that they throw some money at the transfer market this summer to plug some key gaps.

A report from Goal has looked at some recent comments from Rio Ferdinand, and here’s the three players that he wants to sign this summer:

One of the biggest problems in this team is the defence which continues to leak simple goals, and it’s now proven that neither Eric Bailly or Victor Lindelof are good enough to partner Harry Maguire.

The PSG centre-back is the complete defender who’s good on the ball and also has the pace to cover for Maguire’s lack of pace, and his signing could fix a major issue going forward.

Rice has been linked with a big move for a couple of years now, and there’s no doubt that he would bring some real quality to the Man United midfield.

If you were somehow able to combine McTominay, Matic and Fred then you would have the complete holding player, but they all have a flaw and Rice would shield the back four properly, he would help to tighten them up from set-pieces and he’s great on the ball so it could make a huge difference to the team.

Edinson Cavani is still playing at a high level so he and Mason Greenwood can cover the number 9 role, but they need someone who has the ability to tear teams apart from the right-hand side of the attack.

Greenwood is a great player but Sancho would be an upgrade in the position, while his ability to score and create would bring a new dimension to the attack, and it’s hard to see anybody stopping this team: 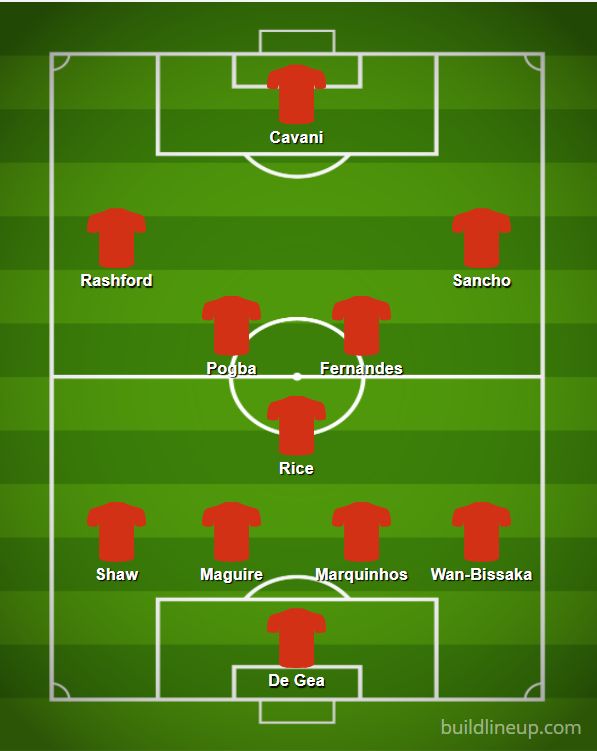