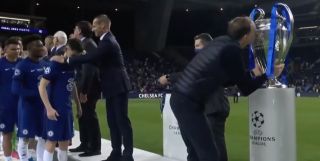 Thomas Tuchel masterminded a 1-0 victory over his counterpart, Pep Guardiola, in Portugal to hand his new club a second Champions League title in nine years.

It’s a remarkable resurgence from the London outfit, having stumbled domestically under the guidance of Chelsea legend Frank Lampard.

With the former Borussia Dortmund coach taking over the reins at the start of the year, leading the Blues to European success in his first (half) season in the English capital, few could argue that the decision to sack the former Stamford Bridge favourite wasn’t justified.

Viewers were treated to some emotional scenes following the full-time whistle, as the Blues squad’s wild celebrations prior to the trophy lift contrasted heavily with a tearful Sergio Aguero who made his final appearance for the Citizens.

The Champions League winners were utterly jubilant as they took to the stage to receive their medals and enjoy a brief moment with the blue-ribboned trophy ahead of Cesar Azpilicueta’s lift.