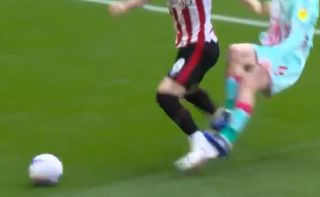 Swansea were already up against it this afternoon after Brentford started with two quick goals, but their hopes have to be over now after Jay Fulton was sent off.

It’s such a tough one to analyse because it’s a really horrible looking tackle, but the way it happens suggest it was a bit of an accident and Fulton’s reaction immediately tells you that he knows it’s a bad one:

Jay Fulton loses his footing and catches Mathias Jensen's heel – Chris Kavanagh was adamant about his decision…was it the right one? ?

The way his foot gets caught on the ankle is really nasty to see and thankfully the Brentford player is okay to carry on, while it’s one of those where Fulton can’t really complain, even if it wasn’t completely intended.