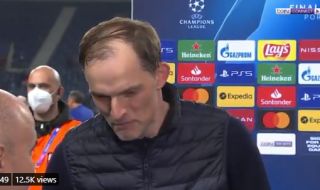 Watch below as Tuchel credits his family for keeping faith in him when he was starting out as a manager, when his teams played in front of just 20 spectators.

MORE: Tuchel is just the second manager ever to do this to Guardiola

Now, the German tactician is a European Champion, and he also credited his lucky shoes for the result.

As he explains in the video clip below, Tuchel forgot to wear them for Paris Saint-Germain last season as they were beaten in the final by Bayern Munich, but he didn’t forget them this time…

"I could have never imagined as a young coach that I could touch this cup!" ?

An emotional night for Thomas Tuchel who had his family in Porto as he won the Champions League, and the importance of some lucky shoes! ?#beINUCL #UCLFinal