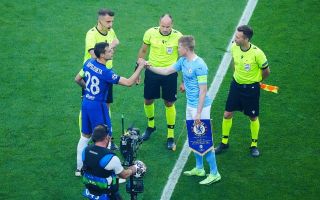 Some Chelsea players reportedly learned that Manchester City already had a celebration party planned before the Champions League final on Saturday night.

Kai Havertz’s goal ended up giving the Blues a 1-0 win in Porto, and it certainly seemed like Thomas Tuchel’s side looked highly motivated.

According to the Daily Mail, some players were given an extra incentive to win the game after learning that City already had their celebrations planned before the night of the game.

In fairness, it’s probably quite common for football teams to plan events like this, as they might require hiring big and expensive venues in advance.

We often hear about it when it goes wrong for clubs, however, and it certainly makes it sound like City got a bit ahead of themselves before this match.

Pep Guardiola’s side were undoubtedly the favourites beforehand, but they weren’t at their best as Chelsea lifted the trophy for the second time in nine years.

Tuchel will now hope CFC can emerge as more serious challengers to City in next season’s Premier League title race.