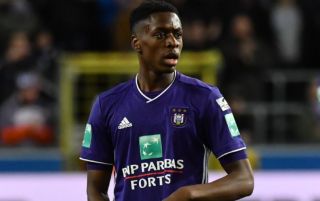 As a general rule you would rather sign a player before a major international tournament, especially if it’s a younger player who is still unknown to many on the global stage.

Sambi Lokonga has emerged as one of the brighter talents for Anderlecht over the past couple of years, but they haven’t been as dominant as they have in the past so most of his action has been confined to the Belgian league.

He’s also only made a handful of appearances for the Belgian U21 side so he is still largely unknown, but a report from DHnet has suggested he’s now on standby for a place at Euro 2020 after Axel Witsel picked up an injury.

In the same report they also claim that Arsenal are tracking his progress with a view to making a potential offer, but that bid won’t come straight away so anything would need to wait until after the tournament.

READ MORE: How Arsenal could sign a huge talent for only €2m – Is it worth the risk?

That could be a risky one for the Gunners as playing for one of the best teams in the tournament will immediately thrust him into the spotlight, and if he does go on to light it up then his price tag will shoot up and other clubs will offer more money that Arsenal can.

He became a first-team regular this season and he tends to be deployed as a central midfielder but he can also play a bit deeper, while he’s only 21 so there’s plenty of potential for growth there too.

It’s also thought that other clubs are aware of his talent so there will be interest if he’s available, and it’s an interesting situation to watch going into the tournament if he is picked.