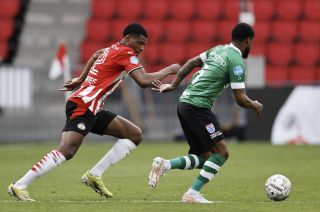 That’s according to Voetbal International, who claims the Toffees are on the lookout for defensive reinforcements in time for the new 2021-22 season.

Represented by super-agent Mino Raiola, Dumfries, 25, has spent the last three years with Eredivise side PSV.

Capable of playing as either a right-sided full-back or wing-back, Dumfries has not been shy in revealing his intentions to take the next step in his career – and this summer could see the 25-year-old do just that.

It has been claimed that Everton’s Brands is set to play a major role in the club attempting to lure Dumfries away from Holland.

The defender’s current deal runs until 2023 so negotiating with PSV will not be an easy task and could eventually lead to the Toffees having to part ways with a large sum.

However, there is no denying that Dumfries wouldn’t be an exciting long-term replacement for club legend Seamus Coleman, who is now 32-years-old.

Dumfries featured in 30 league matches last season and was directly involved in an impressive eight goals.